so lecture was cancelled on thursday, which gave me the chance to head out for lunch with 2 of my homiez, followed by a trip to the natural history museum! yay!

why it was an amazing afternoon:
1. the sun was SHINING 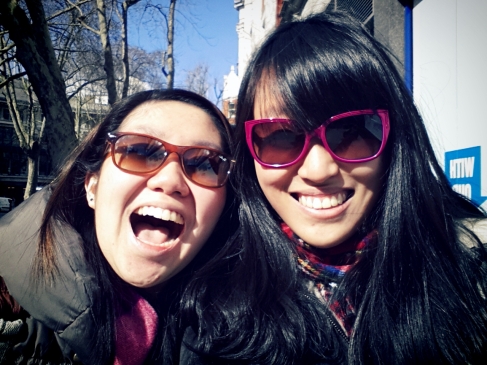 2. nothing beats traipsing around a relatively empty museum on a weekday afternoon with not a care in the world 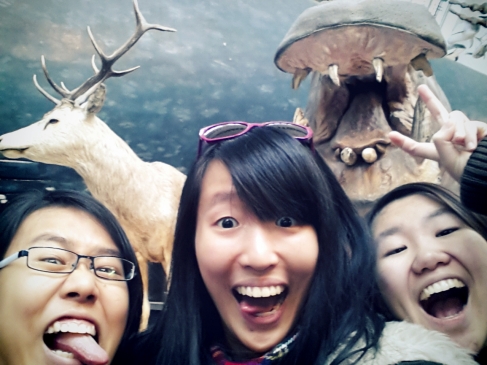 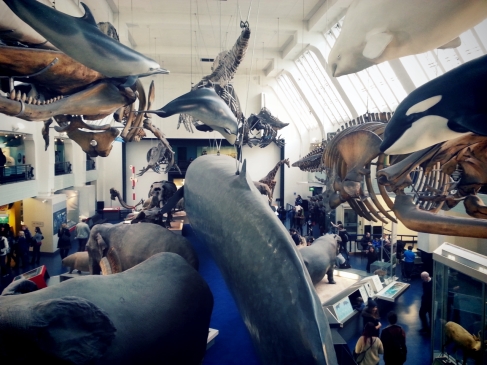 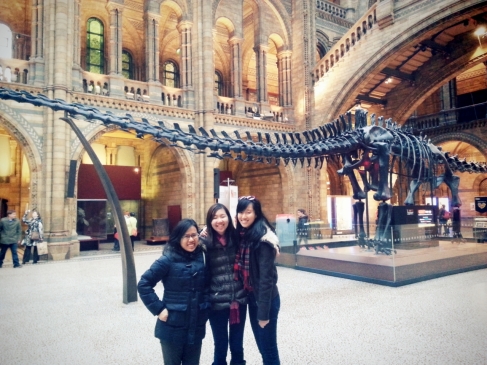 despite having been to charlotte street on multiple occasions, i never noticed koba which is located just off charlotte street on rathbone street. we had planned to have korean food for lunch and had kim chee at holborn in mind, but it was my korean hallmate who suggested that we try koba instead. i am so happy we had that conversation about good korean restaurants over hall breakfast that morning, because it was YUMMY. 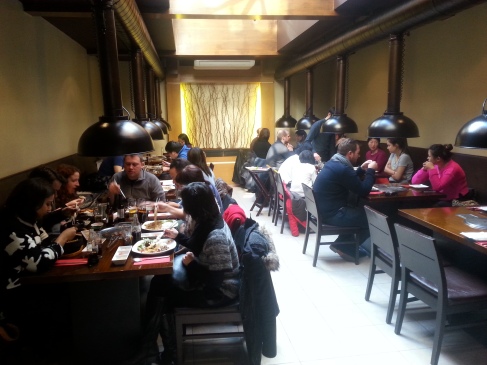 we were all excited when we got seated at our table and checked out the lunch menu because it was really extensive – many places tend to have fewer items on their “set lunch” menus, but koba is different. they seem to have nearly everything korean that you would possibly want to eat (at least for me) and it was the kind of menu where there was something for everyone, which is great! 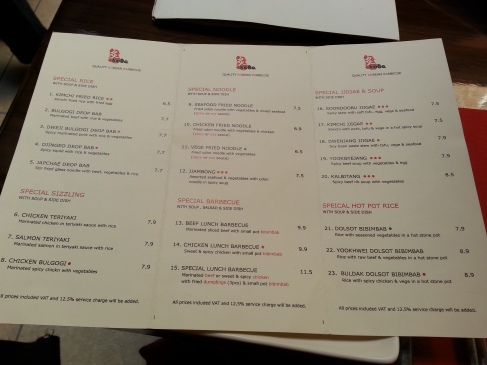 their specialty seems to be their barbequed meats and so it was the “beef lunch barbeque” that I opted for. it came with a side dish with the usual mixed korean appetisers, soup, salad, a baby bowl of bibimbap (it was REALLY baby-sized; more on this later) and meat to be barbequed; there was plenty to eat and i was a very happy bunny. 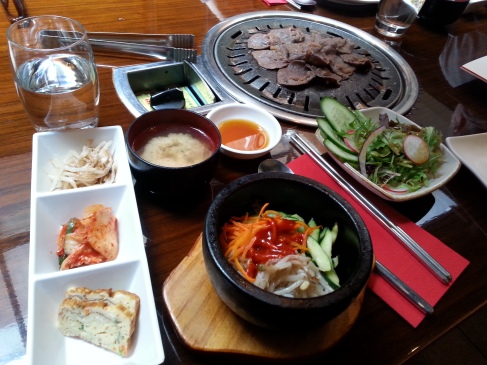 i’ll start with the bibimbap – it was delicious and the ingredients were fresh and generously heaped on top of the rice. the amount of chilli sauce that the waiter added was also perfect – it was very tasty and satisfying. my only qualm was that when they described the bibimbap in the menu as a “small pot bibimbap”, they really meant it – it was TINY and if not for the fact that i was taking small mouthfuls to savour it, it would probably have been gone in 2-3 mouthfuls! but i’m not complaining;the star of the set is probably meant to be the meat anyway. 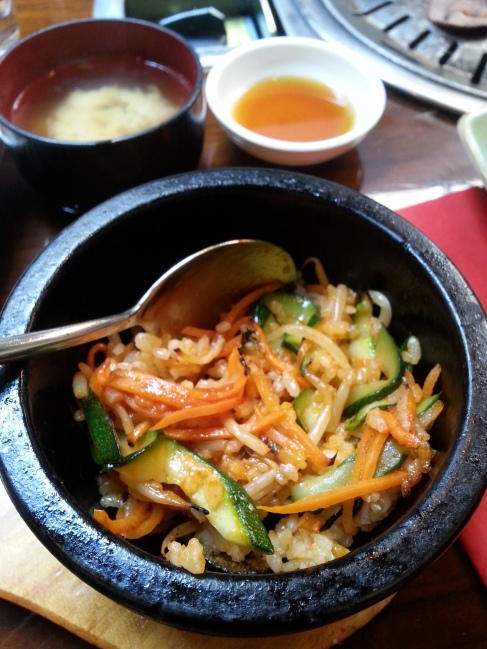 moving on to the beef, they gave a very generous 12 slices with the set. they were sliced thinly so if you are looking for something thick, its probably better to order it off the a la carte menu. they bring it to the table raw, and the waiter helps you cook the slices on the stove in front of you. 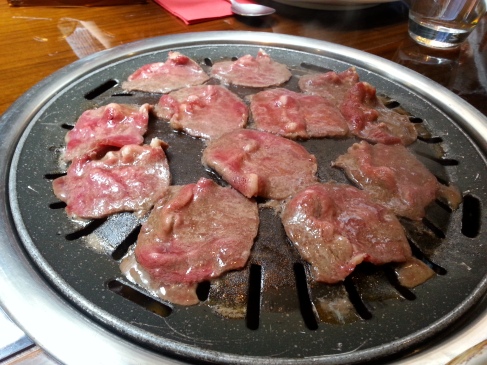 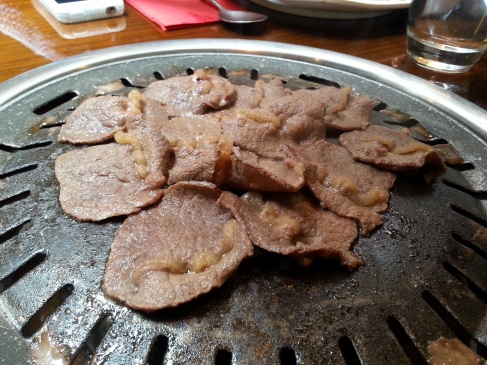 the slices were tender, juicy, marinated well, and had a slight taste of the barbeque, just as they should have! seemed like good quality stuff and so my fears of quality of the meat being compromised since it was a set lunch were unfounded. the salad provided a good balance to the “heat” of the barbeque – the vegetables were fresh and crisp with a light japanese-type (though in this case, i should probably say it was korean) dressing.
i felt that what i ordered was really quite value-for-money, which is always important for students attempting to keep to a budget 😉

my friend ordered the bulgogi (she was dying to get the barbeque set too, but was recovering from a funky stomach illness from eating oysters at brighton – DO NOT EAT RAW OYSTERS BY THE BRIGHTON PIER; you have been warned. In fact I am heading there tomorrow and will be staying far away from them wahahaha but okay, I digress. Back to the korean food.) and she was really satisfied with it too! the serving was generous, and it came with appetisers and soup as well.
here is a picture of her taking a picture of her food before tucking in. #ASIANALERT 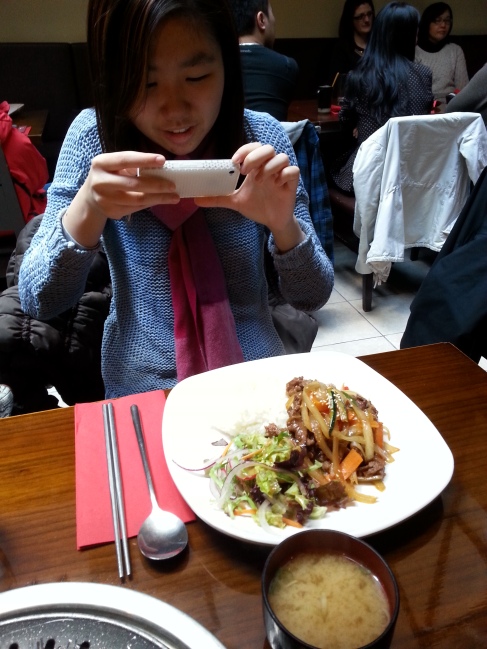 my other friend ordered bibimbap and got a nice full-sized bowl (unlike my tiny one – but at least they did mention that it was a “small pot” in the menu), which she was pleased with.

ambience: neat, clean, modern, bright, airy, generally very pleasant. OH YES and very importantly for korean restaurants that have hot plates/barbeques – there is surprisingly NO heavy smell of barbeque hanging in the air; we walked out of the restaurant smelling as lovely as ever 😉

who i would recommend this to: anyone looking for a place that serves reasonably priced korean food, with an extensive special lunch menu. the tables are well-spaced out and the restaurant does not feel cramped at all. a possible venue for larger groups and a relaxing lunch. there was a steady stream of customers and the tables were filled throughout the time we were there, but it seems like getting a table shouldn’t really be too much of a problem since they are efficient with their service and turnaround time is not long, at least when we were there.

will i return? YES. my new go-to korean place for now. compared to assa (where i used to go for my korean fix), i felt that the environment was nicer: bright, airy, nice-smelling (one does not walk out of assa without the smell of food lingering on your clothes for the rest of the day – best to visit it on a day you’re planning on doing laundry hahaha). if you’re craving some hotpot goodness then assa might still be the place for you though!

PS. the koreans at the table next to us were making loud, satisfied noises (accompanied by satisfied stomach-rubbing – or maybe i was imagining this part) and that is always a sign of good food right? natives giving their stamp of approval! 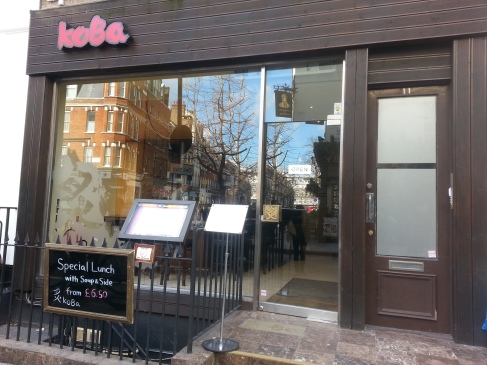