am very glad we seized the opportunity to check brixton village out before kodaline’s show at o2 brixton (which was beyond amazing; they are SO incredible live!!!) last friday night; the amazing pulled pork that we had at the joint was perfect fuel for the long night we had ahead of us!

nestled happily among other hidden food gems in the very interesting brixton village market is where you will find the joint. it occupies a tiny shop space which is solely for its kitchen, while its patrons occupy tables which are spread out along the walkways in the shop’s vicinity: 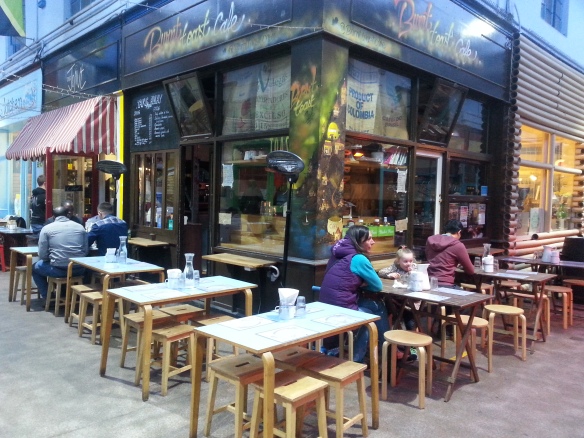 this picture was taken when we first arrived around 6pm so it hadn’t gotten crowded yet; the tables filled up really quickly after a while! the menu at the joint is simple but very satisfying; they have a great range of sides to accompany a smaller range of mains, and everything is reasonably-priced!

we initially only ordered just 1 side – the hush puppies, because it sounded exciting and was unique to the joint. but the food was so good that we ended up adding on another side order of hot wings (recommended by the waiter)! the sides come served in bags tied with twine and labelled with a note – A+ for the adorable idea!

we thoroughly enjoyed the hush puppies! the (friendly) waiter described them as savoury donuts fried with sweet corn, and they ended up far exceeding my expectations! they came wonderfully warm and drizzled in a barbeque sauce, perfectly golden-brown and crisp on the outside while fluffy and light inside:

they were a little denser, firmer and less pillow-y than a regular sweet donut which i thought was the right consistency to go with the savoury taste of it. (for those who know what indian rojak is, they were like the delicious fried dough fritters you get with that!!! almost a taste of home right there 🙂 ) i absolutely loved how they were crunchy on the outside but soft inside, and also how they were not very greasy at all despite being freshly-fried. a very tasty and unique side dish that i will not hesitate to order again when i return!

as mentioned earlier, we were so pleased with the food that we decided to order a serving of hot wings midway through the meal:

i thought these wings were very similar to those they have (and that i adore) at patty & bun! the sauce was very asian-inspired, barbeque sauce-based and topped with a healthy sprinkling of spring onions and chillies. we were quite surprised that the wings did actually pack some spice, unlike many places which dub their food “spicy” when it isn’t actually (at least not for our spice-accustomed asian tongues, that is)… 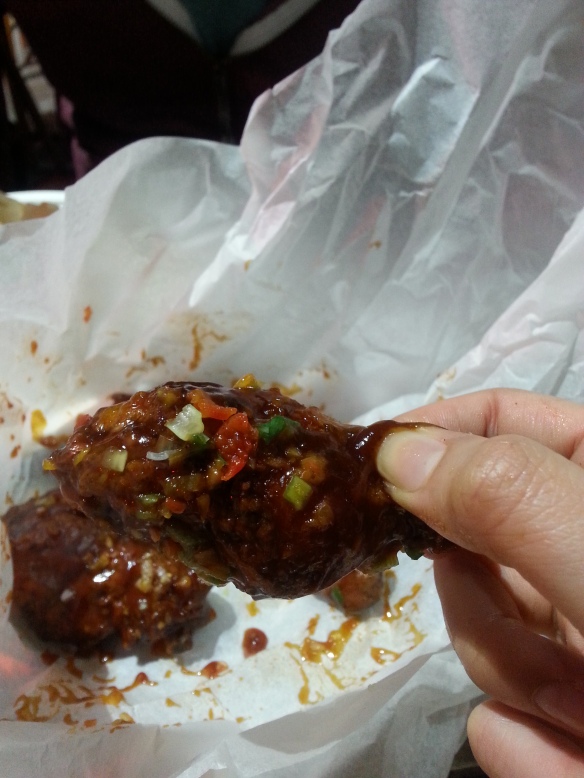 the wings were delicious – they were thoroughly seasoned and cooked to perfection, and the meat fell off the bone and was extremely tender and moist! given that there were only 2 wings and 2 drumsticks, they were polished off in no time.

when i saw them being brought towards us standing extremely tall and proud in all their glory right in the centre of the plates, i was slightly daunted by the prospect of (1) having to attempt to eat it glamorously and (2) having to finish all of it. turns out the former was warranted (no cutlery provided, its all about getting down and dirty!) but the latter wasn’t (it was so good i finished every single bit).

evidence of getting down and dirty (#glamforever):

i ordered the asian 16 hour bbq pulled pork bun, which differed from the regular one in terms of its toppings – the base of bun and salad and coleslaw was the same, but the asian version has pickled ginger, chilli and spring onion instead of apple candied bacon in the original! it was delicious and i thoroughly enjoyed it. after trying a bit of each other’s, we agreed that the asian version packed a greater punch and was the more memorable of the two! the original version was lighter though; the barbeque taste in the asian version came out a lot more strongly which made the former leave a much “cleaner” aftertaste.

the pulled pork, which was heaped very generously in the bun, was sweet and juicy – the kind of juicy that results in liquid trails racing down your hands. but i didn’t mind one bit because it was certainly worth the mess! the pork was delicious, but my favourite part of the whole thing had to be the bread – sourdough infused with vanilla and fig (which explains its interesting yellow colour!). i honestly could not make out the flavours of vanilla and fig very distinctly at all, but there was something very special about the texture and taste of the bread. it has a wonderfully browned “skin” and a brioche-like consistency – absolutely loved it!!! needless to say, the bun, pork, salad, coleslaw etc all came together wonderfully to make for one very good pulled pork bun, and what made it even better was how reasonably priced it was – £7 for something so big!!! we left extremely satisfied, despite our sticky hands and the smell of sauce that lingered on them (despite multiple washes) for the night.

i was very pleased with our choice of dinner venue before the concert, and it set the tone right for what promised to be a fab night out 🙂 so if you’re planning on going to brixton village and don’t know what to eat, i assure you that this will not disappoint (it certainly didn’t let me down)! i need to make another trip back soon to check out all the other exciting things they have on offer; its a place that deserves to be visited whether you’re going for a concert in the vicinity or not!

PS. be sure to wear a little more because it can get a little cold and drafty along the alleys of brixton market in winter. once the food comes and you tuck in though, you’ll be warmed up in no time 😉