brgr is yet another place that has added itself to the already long list of choices we have for burgers here in london. being the first outlet outside of lebanon where it originated, i was initially apprehensive of how it’d fare but it came highly recommended from friends so this is where i ended up on a thursday night when i was craving some manfood! hahaha.

you’ll find it at the end of wardour street that’s closer to oxford street, and this location was extremely welcome since it shortened the trek from school after a torturous jurisprudence lecture (am sure it’ll be as welcome if you’re heading over with aching legs after intense christmas shopping too)! the interior of the shop was not quite what i was expecting – in contrast to other burger joints like patty and bun (possibly still my favourite burger in london; see review here), the decor in brgr is not what you’d expect from a typical burger joint – it seemed to be going for a more smart & sophisticated vibe with its dark colour scheme, and staff were dressed in crisp white shirts.

at brgr, you can construct your own burger, choosing the kind of patty, followed by any sauces or cheeses that you want to add to it. here’s the menu: 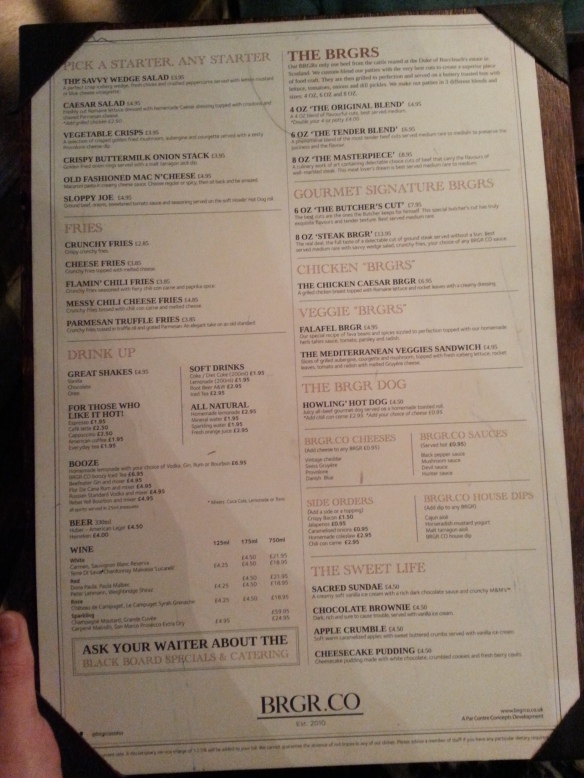 they pride themselves on the beef they use (premium beef sourced only from the duke of buccleuch’s estate in scotland), and the signature burgers are supposed to contain only the best cuts, more so than the standard patties in their regular burgers. my friend and i both decided to go for the 6oz “butcher’s cut” plain, without any distractions from the fancy cheeses or sauces, and could not resist getting a serving of the parmesan truffle fries to share (it was calling out to us once we spotted it on the menu).

service was prompt (though it was hard to get the staff’s attention as it got later and the place filled up) and we were served our food rather quickly! the burger came deconstructed, with the veggie left out by the side – still not sure what the idea behind that is…

lifted up the top half of the burger bun to reveal the AMAZING slab of beef patty within:

i don’t think the picture does how good it looked justice at all – it looked absolutely tasty and juicy and perfectly-cooked and made me want to dig right in. but alas, i had to snap a few shorts of it to share so i had to resist that urge for a bit. my friend on the other hand, promptly attacked hahaha.

all put together now:

the beef patty certainly did not disappoint – the quality of the beef lived up to what it was made out to be. it was tender, juicy, sweet, wonderfully seasoned, and perfectly chargrilled to a pink medium rare. tasted like a gourmet beef patty, and even had that melt-in-your-mouth goodness at some points. the veggies in the burger were simple but very fresh, and the brioche burger bun was yummy – super soft and light and fluffy in all its glazed goodness.

what struck us most about the burger was its simplicity – no fuss in the form of dripping sauces or melty cheese; it was simple and very clean, and that is what makes the brgr burger special in my opinion. after finishing the whole burger (which i thought was a pretty good size), i didn’t feel like i had just eaten something unhealthy (which burgers that are heavier tend to result in) at all! in fact, it was not at all unthinkable to order a second one; it was that light! so it really depends on what you like in a burger – if you’re looking for something hearty and heavy and bursting with flavour, then i think brgr is not for you. (try patty & bun instead!)

we were also extremely impressed with the parmesan truffle fries:

these were calling out to us once we saw them on the menu, and we were not disappointed! the fries were thin and crunchy like what you’d get at macs, but a hundred times better with all that cheese and the fragrance of truffles! i loved how the parmesan was melted over the fries instead of just having shaved parmesan sprinkled on the top, and both the cheese and truffle were well-spread throughout the pile of fries such that each fry had the taste of both. (the worst thing is when you have to eat fries plain because all the toppings are just heaped in the centre and at the top – hate when that happens!!!)

finally, we had a dessert special (they have specials written on a blackboard) – the DESSURGER:

my jaw literally dropped when it arrived at our table – it looked amazing and i had never had a dessert burger before so this was all very novel and exciting!!! luckily it tasted as amazing as it looked or i would have been sorely disappointed.

the brioche was lovely and light and fluffy, and though i was worried that it would just be a giant cream puff-like thing, i was pleasantly surprised that it was not the case at all! all the different components of the “burger” came together wonderfully – the chantilly cream was unbelievably fresh and light, the pistachio bits added crunch, the lemon custard was firm (a little like the texture of ice cream, just not as cold!) so that it didn’t get lost along with the cream, and added a nice and refreshing (slightly tart) lift to the dessert.

at some point we realised that maybe we should really be eating it as a burger so this is what we did:

it was like a massive jam donut, only much much better.

we agreed that it was definitely worth trying but its a special item on the blackboard menu that changes, so i’m not sure how often they have it! just means that if you’re there and they happen to have it, you should definitely order it then 😉