sunday roast is always a good idea, and birthday sunday roast for the last to turn 21 in our house was one of our best ideas yet. the birthday girl actually wanted to have her birthday party at paradise (it was fairytale-themed so it would have been 200% appropriate), but the room size wasn’t suitable for the number of guests so she had to pass… it just made her even happier when we removed her blindfold upon reaching paradise and she realised where she was though!

paradise by way of kensal green is located in a building that looks like any regular neighbourhood pub from the outside and in no way at all betrays the eclectic charm and beauty of the place within. step inside though, and you’ll very soon realise that this is far from your average watering hole:

we were seated here in the bar area because the dining room was fully booked, and found that our initial worries that it would be lacking in the atmosphere that the main dining area had were completely unfounded. with huge flower vases, an interesting mix of furniture and one of the prettiest bar counters i’ve seen, it was perfect for our casual sunday girls lunch.

we opted for a mix of roasts from the menu and after quite a wait (we were less than impressed with the service; more on that later), were presented with huge plates of gloriously hearty fare.

with my fave five – four fab friends and food

i opted for the roast beef: 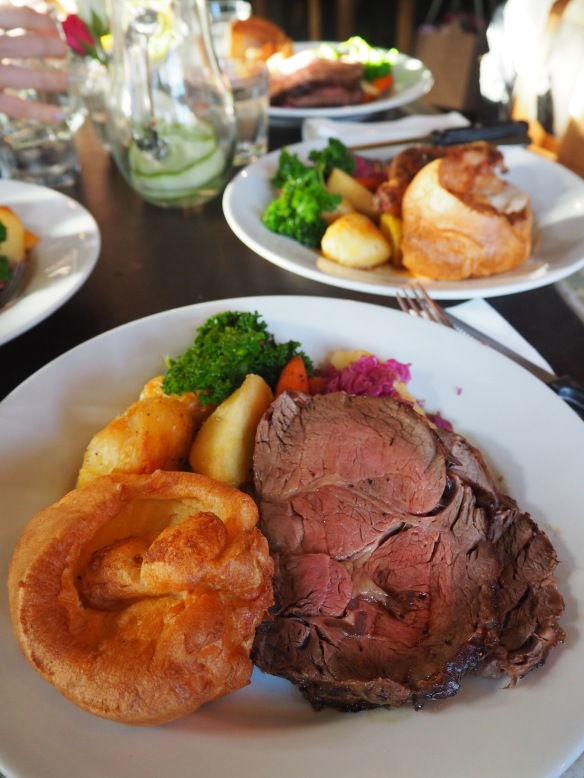 Roast rib eye of beef with all the trimmings – £17.50
the servings at paradise are clearly big; look at the size of those plates! two generous slices of thick and juicy roast beef were served with a warm and fluffy yorkshire pudding and a super delicious mix of roasted parsnips, carrots, kale, red cabbage and potatoes. the picture above was taken pre-sauce (because the sauce took forever to come… it took at least a good 10 minutes and a reminder after the food was first served) and i felt the beef was a tad dry at the edges, but nothing at all that the sauce couldn’t solve when it finally arrived. the meat was wonderfully tender, naturally sweet and very tasty. the yorkshire pudding was warm, light and crispy at the edges but soft and pillowy within. as for the roast vegetables, they were a huge hit at the table. i remember the carrots to be amazingly sweet, and the potatoes to be some of the best i’ve had – they were done to perfection with wonderfully crisp exteriors (we still have no idea how they managed to achieve that). so good was the skin that when we were too stuffed to eat anymore heavy carbo, we found ourselves slicing the potatoes open and digging out some of the actual potato, just leaving the thin crispy edges for our very happy consumption…

the other roasts at the table were the herb crust roast chicken (£14.50) and pork belly with bramley apple puree (£15.50). all the servings were extremely generous and just as delicious – the chicken was roasted to perfection, juicy and moist meat encased by a light crispy skin, while the pork belly was tender and not too fatty with an ultra crispy skin. needless to say, we were all belly happy after (nearly) wiping our plates clean.

there’s always room for dessert though, and especially after the yummy food we just had, we had high hopes for some mouth-watering sweet treats. we ordered 3 desserts to share, and were once again not disappointed with the food at all: 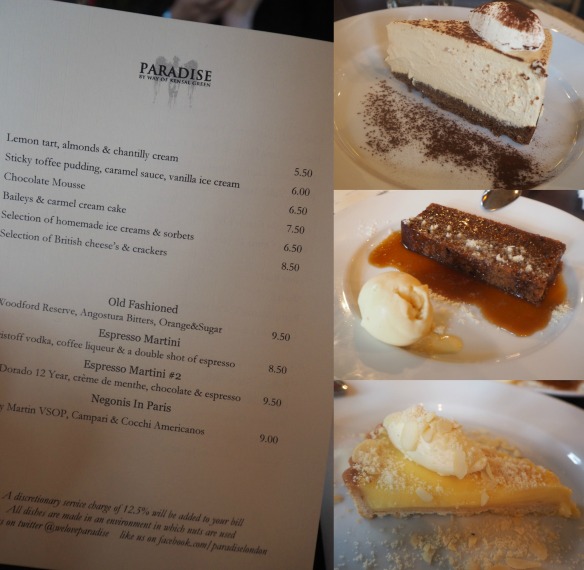 top to bottom: baileys & caramel cream cake, sticky toffee pudding, lemon tart
my favourites were the lemon tart and the sticky toffee pudding. the lemon tart was a refreshing end to the meal as it always is, the lemon filling tangy but not too sour and of a great consistency. the tart base was crisp and light, and the almonds were a nice addition of texture. as for the sticky toffee pudding, it was dense but not too heavy, and the toffee flavour though strong was not cloyingly sweet or overpowering in any way. the baileys cake had an interesting texture that was a cross between a light cheesecake and a cream cake, but reminded me more of the latter. it was very light and its base was very enjoyable though i would have preferred it to be crunchier – instead of the typical kind of base usually made of digestive biscuits, the biscuits used here were lighter and had a subtle chocolatey hint to them.

all in all, we were extremely satisfied with our meal at paradise. the food was great and luckily it was, because the service was rather frustrating at times. don’t get me wrong – the staff were all friendly, accommodating and lovely, but it was the pace of service that left much to be desired. we had a lot of trouble getting the attention of the staff, and whenever we asked for something, it often took several reminders before our requests (which were simple ones for things like sauce, the bill, water refills etc) were acceded to. perhaps it was because it was a busy sunday afternoon for them, but given the popularity of their sunday roast, one would imagine they’d be used to and good at dealing with such crowds.

nevertheless, i would still recommend this beautiful place for a wonderful sunday roast experience and hopefully we have better luck with the service next time!