once you see the glorious weather that features in the pics to come in this post, you’ll realise that this is a rather belated update – it was on the last officially warm day of the year (it was halloween now that i think about it, just about 3 weeks back now?) that i headed to kerb at kings cross for their friday street food market. i actually needed and hence intended to stay in to get some work done that day, but the amazing sun coupled with lure of good food was too tempting to resist so tutorial prep was temporarily postponed…

granary square is just one of the locations that kerb brings the best of london street food together at. the opportunity to try the oft raved about yum bun was the main reason why i made the trek there that friday afternoon, but we ended up being treated to so much more! the food loot for 4 people happily sitting in the sun and waiting to be attacked:

everything was super delish! shall start with the buns from yum bun: 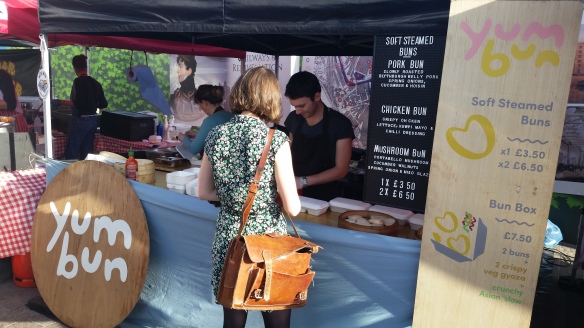 yum buns from yum bun!
having been treated to delicious kong bak paus (for the uninitiated, kong bak paus are basically chinese braised pork sliders) all my life back home in sunny singapore, i was apprehensive about the buns here – would they live up to the hype or would i be disappointed? glad to say i was actually quite impressed, particularly by the buns themselves which were little envelopes of pillowy goodness that held exciting condiments within.

we opted for 1 of each bun, 2 of them as part of a bun box and 1 individual bun. the hot favourite was undoubtedly the chicken bun – crispy chicken, lettuce, kewpi mayo and chilli dressing embraced by a wonderfully soft and fluffy steamed bun. the fried chicken was a huge hit; it was fried to perfection – crispy on the outside but juicy and tender within. the yum factor was further increased by the addition of mayo and chilli which added a real kick to the bun.

my 2nd favourite out of the 3 we got was the mushroom bun – portobello mushroom, cucumber, walnuts, spring onion, and miso glaze. i loved the combination of mushroom, walnuts and miso glaze. vegetarian options don’t get much better than this, folks 😉
as for the pork, this is what i feared – that i would compare the pork bun with other pork buns i’d tried before and be disappointed. the pork bun consisted of slowly roasted blythburg belly pork, spring onions, cucumber and hoisin. don’t get me wrong – it was a good bun still, but i wasn’t blown away or as excited about it as i was about the rest probably because it wasn’t as novel. plus, i thought the hoisin sauce was rather overpowering and it felt like i was eating a peking duck pancake but with pork and inside a steamed bun!

the bun box came with 2 gyozas and a side of asian slaw which were decent but nothing to rave about. the slaw was a rather yummy and refreshing break from the buns though! at £3.50 a bun or £7.50 for a bun box, i would say the buns are on the pricey side but they’re definitely worth trying and i can say with absolute certainty that the chicken bun will definitely be one of my choices when i return.

we also had a kimchi burrito from kimchinary:

gochujang pulled pork shoulder burrito from kimchinary
unfortunately this was one of the first few things we bought so by the time we started eating when we had gotten all the food, it had gone quite cold 😦 it was good enough for us to note its potential for greatness though! we got the gochujang pulled pork shoulder (love me some pulled pork – i can never resist…) and it came in a toasted tortilla with kimchi fried rice, cheddar sesame slaw, gochujang sauce, spring onion and sour cream. the pulled pork was tasty, moist and juicy and went wonderfully with the kimchi fried rice, both of which the burrito was very generously stuffed with. the slaw added a nice refreshing crunch and everything came together very well to make for a really satisfying burrito. as i said before, can only dream of how much better it would’ve tasted if we had eaten it immediately!

we hadn’t intended on getting pizza initially, but after spying people feasting on drool-inducing doughy goodness, we could not resist and ended up ordering a smoked mozarella and pancetta pizza (their special for the day – £7).

wood-fired pizza from fundi
the queue was long but i’m glad that didn’t deter us from joining it because it was worth the wait! the pizza crust was delightfully thin yet thick enough to retain a slight (but sufficiently satisfying) doughy bite (rather than just being crispy right through) and the toppings were fresh and delicious. we watched the dough for our pizza being skillfully kneaded, generously sprinkled with fresh ingredients and then placed into the wood-fired oven. not long after, it emerged in all its freshly-baked glory, smoke and a heavenly aroma emanating from it, and sauce on top still visibly bubbling away from its perfectly-timed stint in the oven.

it was a really yummy pizza and as i type this post, i feel a twinge of regret over the fact that we did not order another one… #midnighthungerpangs #suchislife

lastly, we ordered a serving of meatballs and salad (last-ditch effort to make this meal remotely healthy) from capish: 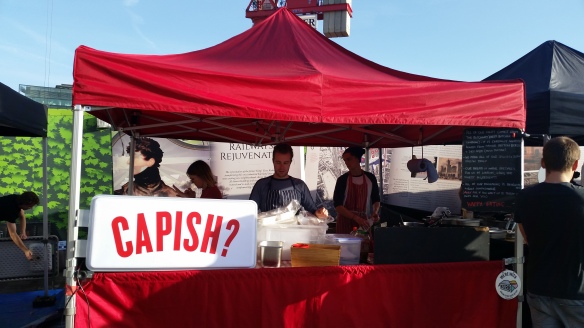 meatballs from capish?
these were some great beefballs – they were huge, chunky and hearty with a warm homely feel to them. despite being so large, they were well and consistently-seasoned so that they were tasty right through, and cooked perfectly so that the meat remained naturally sweet, moist and juicy. we all agreed that you could definitely taste that they were freshly-made and they were so hearty that at some points i felt like i was eating a premium burger patty in large spherical form.

we were rather pleased and quite impressed by the food we sampled at kerb that afternoon. not sure if the wonderful weather (isn’t halloween supposed to be cold/wet/rainy/dark/gloomy/dreary? so ironic.) played a part in making the food taste especially good, and i guess there’s only one way to find out… a return trip is in order! 😉

PS. check out in advance what stalls are going to be at whichever location you choose to visit on the day you’re planning on going here so that you won’t be disappointed! kerb is at granary square for lunch every tuesday-friday.
PPS. oh, food markets… just one of the many reasons why i love london ❤