lolla was the sister’s choice for her birthday dinner this year, so its where we headed for some celebratory feasting on thursday night (her birthday was actually on friday but we were under the giant white tents at marina bay watching the spectacular Cavalia that night, so dinner on thursday it was!).

located at the hiving-by-night ann siang hill, lolla is a mediterranean-inspired tapas-style restaurant that serves a range of what struck me as fusion-type small plates meant for sharing in a group. it occupies the ground and basement levels of a shophouse – the ground floor houses a long counter where guests can watch the chefs at work while the basement is home to a communal table. would have loved to be in on the action at the counter but we were told when we called to make a reservation that the counter was for walk-in customers only (i wasn’t particularly pleased to hear that, to be honest… shouldn’t those who make reservations get first pick of where they sit?). the place is trendily decorated to exude a casual and fun yet stylish vibe, and the restaurant was already buzzing when we arrived slightly past 7.

communal dining one floor down

indeed, testament to the casual and unpretentious nature of the restaurant is the fact that the menu is so simply printed on a piece of paper that doubles up as your place mat.i hear the menu changes according to what seasonal produce is available, and besides whats listed on the menu they also have a few specials written on the mirrored walls for you to choose from. this is what was available on the menu the night we visited:

[NB: as you can probably tell from the picture of the menu above, the lighting where we were seated at the communal table was terrible for photo-taking and the pictures hence don’t quite do the food justice… 😦 probably explains why i am still sore about not getting to sit at the counter despite making an advanced booking; the lighting at the counter is highly optimal]

the service staff were friendly and willing to recommend the specialities of the restaurant, so it didn’t take us long to decide on what we wanted to have.

we started our meal with a full portion of their famous sea urchin pudding:

served chilled, this. was. delicious! and we all agreed that it did live up to the hype surrounding it. a generous chunk of fresh uni sat proudly atop squid ink pudding and the two came together wonderfully to make for highly tasty, rich and satisfying mouthfuls; it was truly the epitome of umami. the squid ink pudding (with tomato, cream and egg yolk thrown into the mix) was smooth and creamy, with a strong taste of seafood. this was the first dish to be served and promptly raised our expectations for the rest of the meal. note that its so savoury that it can get quite heavy and jelat, so ordering a portion (or two, depending on group size) to share is ideal.

next, we were served one of the specials of the day:

this was a special available for the night and we chose it for our dose of greens for the night. the peppers were very well done – very lightly coated in some kind of batter/crispy bits that added texture to the dish. the peppers themselves were cooked to perfection and were extremely juicy and naturally sweet. not quite sure what else went into them but it was quite an interesting and tasty dish. not exceptionally memorable and wouldn’t rave about it or think of having it again though!

we also had some scallops mmm: 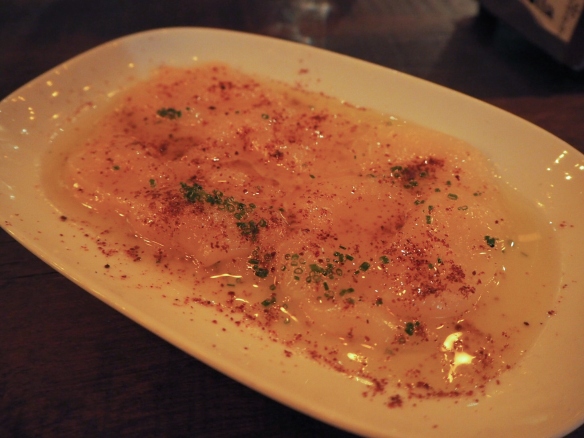 my first thought when this arrived at our table was that it appeared similar to the mentaiko scallop carpaccio at the sushi bar! felt a little bad for / realised i was wrong in making that comparison after though, because i daresay this was much better (also much pricier) / the two are actually quite different. i’m not exactly sure what sauce was drizzled on top of the scallops here (this happened a lot that night – not quite knowing what went into the creation of the amazing flavour explosions in our mouths, if only we could see what the chefs behind the counter got up to while preparing the dishes; this is me feeling sore again about not getting to sit at the counter… hahaha #life), but there was definitely some kind of salt sprinkled on top i think? everything came together wonderfully and the scallops were of just the right thickness – not too thin such that the natural sweetness could not be appreciated, but also not too thick – just as carpaccio should be. very delicious!

there is a section of the menu dedicated to eggs, and we were torn between the tortilla with smoked eel (which was recommended by the waiter) and the scrambled eggs. eventually settled on the latter:

did not regret choosing this over the tortilla one bit! topped generously with bottarga di muggine which is fish roe from grey mullet, these were some of the best scrambled eggs i have ever had. if only the lighting at the table was better, you’d be able to see the glorious yellow of the egg and the wonderfully creamy texture of the eggs. the texture was really spot-on – it was creamy and slightly runny (but far from being too wet), and the fish roe added a nice saltiness to the eggs. once i took my first bite of this dish, i lamented to the mother that “i wish i knew someone who could make scrambled eggs as good as these”. true story.

our meal continued with some meat:

these pieces of beef tripe were cooked to absolute perfection – slightly crispy on the outside but tender, moist and having just the right amount of chewiness that tripe should have within. not quite sure what they were seasoned in but they were extremely tasty! the tripe pieces also came accompanied by some kind of tomato/carrot/celery mix, and the two went wonderfully together – the tastiness of the tripe was very well-balanced by the sweetness of the veggies which were soft and wonderfully sweet. there was also a subtle smoky taste, possibly from being grilled? a great meat dish to order if you’re feeling a little adventurous and want to try something different from the usual lamb cutlets or steak.

the other meat we ordered was the pork collar which came recommended by our waiter:

pork is my all-time favourite meat so i was immensely excited to try this! we requested for it to be medium rare and that is exactly what we got – thick slices of meat cooked precisely to medium-rare as evidenced by its pinkness. the thickness of the pork made for a great bite that proceeded into close-to-melt-in-your-mouth goodness. the meat was so tender and naturally sweet that the sauce drizzled on top of it wasn’t really needed. i wouldn’t say we were disappointed by this dish but i think i was expecting more in terms of flavour, especially because of how good everything else we had tasted was up till this point. the pork was amazingly cooked, but taste-wise it was pretty much just like chinese cha siu (very expensive chinese cha siu…).

back to seafood, we also ordered the grilled octopus:

this was a hit with us – the octopus was very fresh, and was speckled with charred bits that added to the taste and texture of each piece. drizzled with a sauce that was subtly spicy and accompanied by lime, this was like grilled sotong on steroids. each piece was crunchy and sweet, with none of the mushiness/sliminess/stringiness that non-fresh or poorly-cooked octopus tends to have. needless to say, our tummies were happy. very happy.

the last item we ordered for the night was the tuna tartare: 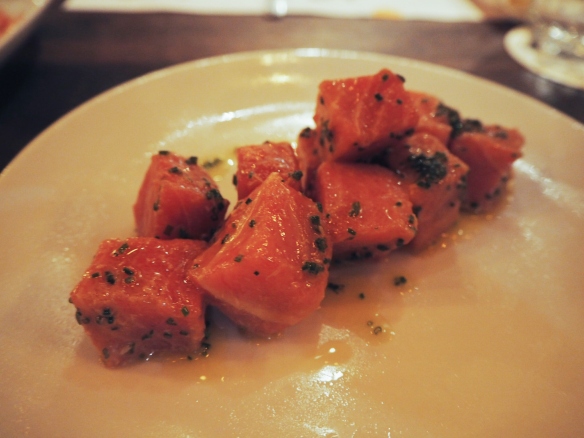 they had forgotten about this item we had ordered but thankfully we remembered it was missing and had them serve it promptly! (one of the) best of the night was certainly saved for last. chunks of tuna are seasoned in something (once again) mysterious and magical and all our eyes lit up as we took our first bites of this super yummy dish. the pieces were very well-chilled (which certainly upped the delicious factor; nobody likes warm sashimi) and had just about enough fattiness to have a hint of a melt-in-your-mouth effect. my only qualm was that some pieces had strings of fats which were hard to bite through in them, but the exquisite flavour of them more than made up for it. this is definitely something i will not pass on when i return to lolla!

finally, we ended the meal with dessert: 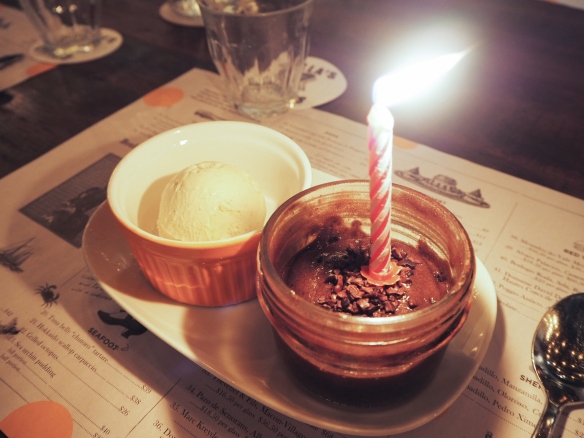 this was the only dessert on the menu (they also have doughnuts, crema catalana and a selection of creamier ice creams) that really called out to us, and we were not one bit disappointed with our choice. we all agreed that this was one of the best chocolate puddings (or even desserts, for that matter) we have ever had!!! it was so so so good. the dark chocolate was extremely rich and delicious, and the pudding actually resembled the inside of a molten lava cake (only the best part of it), only better 😉 the addition of chocolate and coffee chips sprinkled on top added texture and taste to the decadent and ultra creamy and smooth pudding and paired with the vanilla ice cream (which i really have limited recollection of; it was all about the chocolate, really), this is really a chocolate lover’s absolute dream, and we were so tempted to order another serving!

i love birthdays in the family because it means not just getting to enjoy good food, but enjoying good food in great company ❤ we had a great meal at lolla (though we weren’t quite as full as we had liked to be and proceeded to maxwell round the corner after dinner for some supper #familyofpigs) and though i thought it was quite pricey given the serving size, i anticipate that i will be back – the innovative dishes and bold and delicious flavours that really work are a huge draw. hopefully i’ll get a counter seat when i return so that i can take better pictures that do the very yummy food justice. i apologise again for the lousy photos; i did try my best to save them by editing but they’re still far from what i would have liked 😦 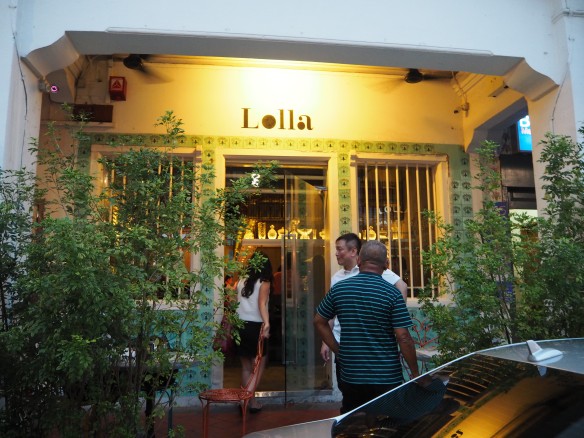 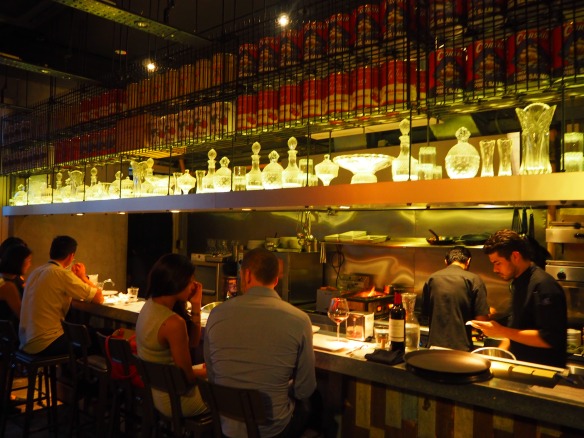