i previously posted about the great value-for-money set lunch that tamashii robataya offers (read about it here), and this time my family returned to try the omakase menu for my sister’s birthday! at a hundred and fifty eight per person (it was actually 128 but we requested for the beef & truffle rice bowl which they charged an additional 30 for), we were served 8 delicious courses (including dessert), and it was a very good night.

for the uninitiated, omakase is a bit like the japanese version of a degustation menu, except without a fixed menu. what the chef serves his customers is entirely up to him, and it normally consists of multiple courses starting from the lightest to the heaviest ones, usually using seasonal ingredients. omakase is actually a japanese phrase that means “i’ll leave it to you”; so you’re basically leaving everything in the hands of the chef and hoping for the best 😉

at tamashii, they have omakase menus going for $88, $128 and $168 but according to my dad, you can just state your budget (if its in between their fixed prices eg $140) and they’ll serve you something according to what you’re willing to pay.

our meal started with a platter of raw vegetables – corn, tomatoes and eggplant.

it was a very nice and light start to the meal that cleansed our palettes for the rest of the dishes to come! the vegetables were extremely fresh and both the corn and the tomato were wonderfully sweet and juicy. despite being raw, none of them had any hint of bitterness or tartness or anything negative associated with eating raw veggies; they all had a nice crunch to them and definitely did not make us feel like grazing cows hahaha.

our next dish was a sashimi platter: 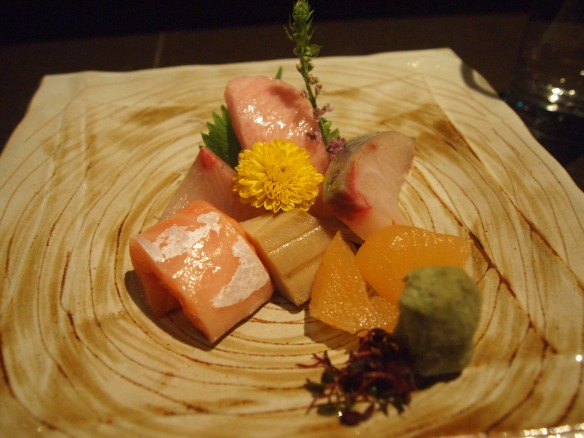 every single piece of sashimi on the platter was to die for – of a really high quality and so amazingly fresh! there was salmon belly, tuna, swordfish, abalone and roe (that looked like a candied orange at first glance hahaha). the slices were thick, well-chilled, and extremely smooth. my favourites were the roe and the tuna:

i think it was my first time having roe in a sashimi platter. i loved the texture of it – it had a nice bite with the little eggs popping in your mouth, and was so fresh without any fishy taste that people sometimes complain of when eating fish roe at all!
the tuna was AMAZING. best sashimi ever. just look at that:

tuna in all its amazing melt-in-your-mouth glory. I SALIVATE and this picture has made me crave more of it omg. it was not fibrous or fishy at all, like some people complain of when having tuna that isn’t of such a great quality.

our third dish was clams cooked in broth:

this dish was enjoyable, but i didn’t think it was anything exceptional or outstanding. the clams were fresh and the meat was sweet and juicy, while the broth was light, garlicky and tasty (i finished every drop of it). they were also cleaned well ie did not have any random grains of sand in them which is what you sometimes get when having shellfish like that – hate it when that happens! it was a bit like a japanese version of vongole – my dad’s cup of tea!

after the clams, we had this amazing grilled pork cheek: 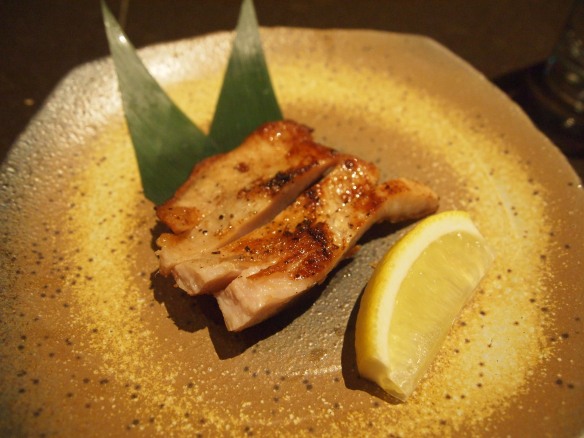 i know it looks super nondescript, ordinary and plain but it was one of the BEST porks i have ever eaten. pork is my favourite meat (along with duck) and here it was done so simply yet tasted so good. the meat was so tender, juicy and naturally sweet. it was lightly grilled (to perfection) and was slightly crispy on the outside while remaining moist on the inside. the cut of pork they used was really good and had just the right amount of fat in it to give it the perfect texture when bitten into.

next, we had a whole grilled fish (sorry i can’t remember the exact type of fish this was!):

it was only slightly seasoned with a little salt but still tasted very good because fish that is fresh doesn’t require much seasoning at all anyway. crispy on the outside but nice and fleshy inside, it was a nice and light course that followed the pork.
beware of the bones when having the fish though: 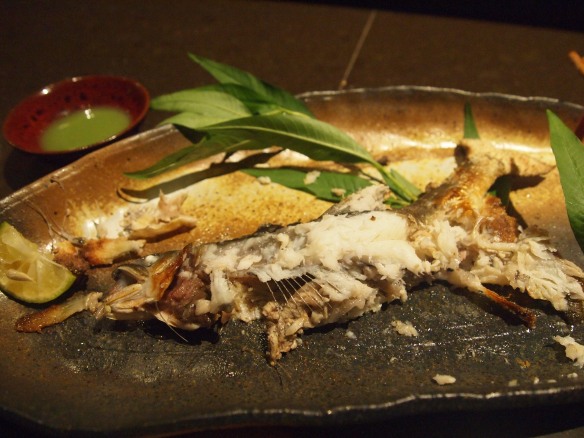 halfway through the fish, i started lamenting the fact that i was being made to work too hard to enjoy my food (there were loads of bones to avoid and pick out) but i think it was worth it in the end 😉 hahaha.

we then had some tempura (but not the regular prawn/vegetable tempura) – shishamo and zucchini flower with cheese:

the batter was light and fresh, and the ingredients were coated in just the right amount of it. i liked how the ingredients they chose for the tempura were quite novel and the addition of cheese to some of the pieces surprisingly did not taste odd at all! the cheese added a nice twist to the tempura and made each piece have a very interesting mix of textures – crispy batter, sweet juicy zucchini and soft melty cheese. 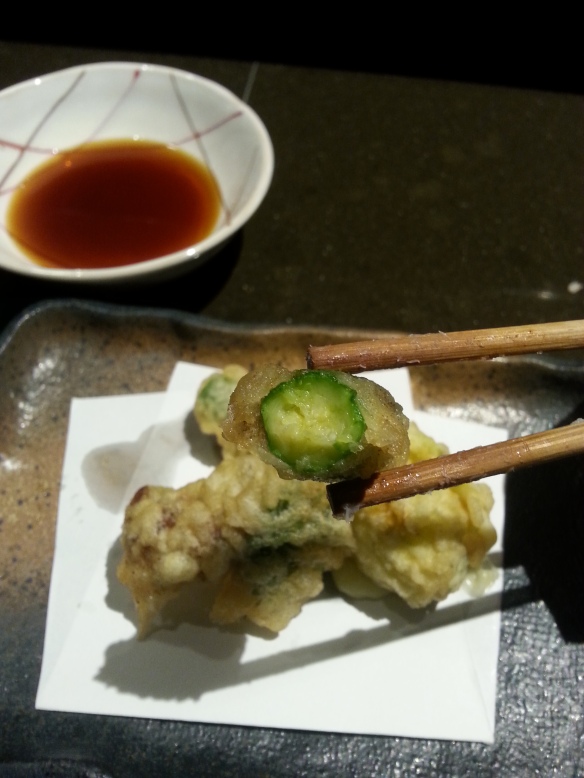 i also really enjoyed the shishamo. it was big and bursting with roe: 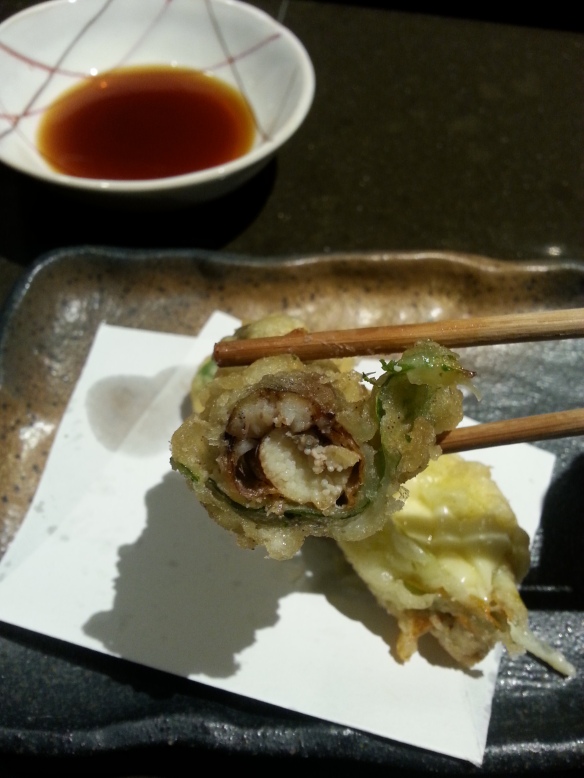 last but DEFINITELY not least, we had the saga beef donburi! this wasn’t part of the omakase menu actually, and costs $55 per bowl if you order it from the a-la-carte menu, but because we added it on to the omakase, we were charged $30 per bowl.
tender and perfectly grilled saga beef sits atop a bowl of rice that is mixed with truffle, and finished off with a perfectly cooked onsen egg: 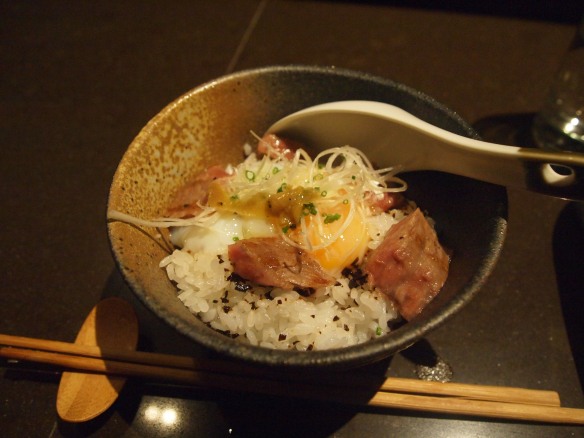 break the egg yolk (i did this very very reluctantly – i am a total sucker for runny eggs and having wet yolks whole so that they can explode in your mouth) and mix everything together in the bowl; you will promptly realise that heaven is a place on earth 😉

the beef was tender, juicy, sweet and so marbled that it made it seem like it was melting in my mouth. the truffle was also generously added and everything came together to make a bowl of really good stuff 😉 at $55 i do think its a bit pricey especially since the serving isn’t big and they only give about 5 pieces of beef. but if you’re willing to spend a little more, then i think its worth the slight splurge.

and then there was dessert! matcha cheesecake, mochi and grape sorbet: 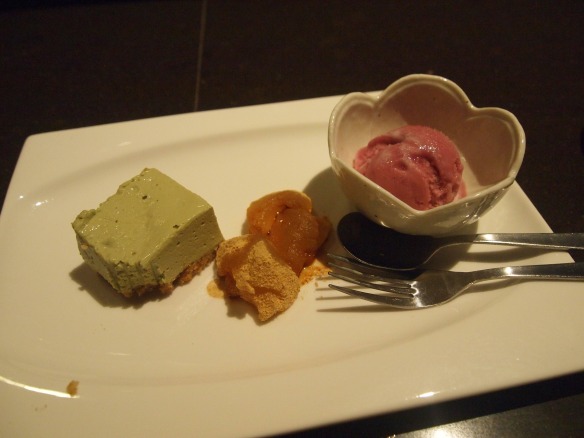 i loved the matcha cheesecake and mochi that was coated in soy bean powder, but wasn’t a fan of the grape sorbet. the matcha cheesecake was light and fragrant with the quintessential biscuit base while the mochi was very yummy and nailed what the texture of japanese mochi should be like. as for the grape sorbet, i think tamashii definitely has better ice cream to offer (see my previous post where we had the yuzu sorbet and black sesame ice cream on our last visit – they were both very good). my parents and sister didn’t mind it, but i thought it was rather sweet and made the grape flavour quite artificial.

once again, tamashii did not disappoint! apparently it rarely ever does, given that my dad is now their loyal customer who goes for lunch at least once a week; he is seriously addicted to their truffle chawanmushi. they’re getting very popular though, so be sure to make a reservation especially at lunchtime on weekdays!

it was a great meal overall fit for a great sister who was turning 22 whooooo! -cue taylor swift’s “22”-

ps. i just have to say – i adore cedele’s black sesame cake. i am a huge fan of black sesame and if you are too, its definitely worth trying!