i am ever thankful for the weekly long weekends i have the pleasure of indulging in; its amazing what a difference an extra day (or two #terrifictimetabling heehee :P) off school can make! indeed, monday blues this week were even more non-existent than normal because the weather was amazing and we celebrated a very dear friend’s birthday with good food (both at brunch and dinner mmm…) and even better company ❤

after successfully surprising aforementioned birthday girl bright and early at 9am in the morning by sneaking into her room and hiding behind her bed before jumping out screaming “surprise” as the best birthday song ever started playing, we set off for caravan at kings cross for birthday brunch.

perhaps it was the beautiful weather that day which made all the difference, but i loved the look and feel of granary square where caravan is located. housing the central st martins school, the former goods yard is made up of tall imposing buildings surrounding a large bustling square with a carpet of little dancing fountains. there’s also a little canal running by the side of the square with lots of activity going on. the inside of the building was equally impressive – a large trendy space with high ceilings, plenty of seating area and a palpable buzz from a healthy and extremely trendy crowd.

one of the best things about caravan is that they open early (8am on weekdays) and close late (midnight on fridays and saturdays); it really is a great place for all-day dining. they have a different menu for different mealtimes throughout the day, and they are the kind of menus which make you want to order everything on them because everything sounds yummy 😛 check out the menus here.

we started off our meal with a pick from their list of daily bakes – a spiced apple crumble slice which was a very delicious start to our brunch: 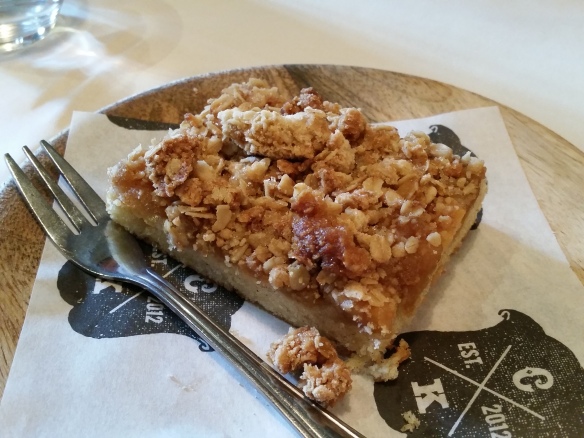 spiced apple crumble slice – £3 (if i’m not wrong), £3.50 at the most
we were actually expecting more of a cakeslice-type slice of tart but this was good all the same. it was moist and dense and the crumble on top was yummy, lending the slice a nice addition of texture, crunch and just the right amount of sweetness coming from the fresh, juicy and subtly-spiced apples. needless to say, it was gone in no time, long before our other orders arrived…

as for the mains, i opted for the jalapeno cornbread. i had wanted to try their aubergine puree dish but they had run out! 😦 nevertheless, the cornbread was satisfying:

jalapeno cornbread, fried eggs, black beans, guindilla pepper – £8.50
it isn’t quite clear in the picture but the dish consisted of 2 pieces of cornbread and 2 fried eggs. i love cornbread and this was no exception. the jalapenos added an exciting twist and upped the spicy game of the bread, while bits of corn embedded in the bread balanced it out with sweetness. the bread was dense and moist as it should be, but i found it a tad oily – perhaps from the fried eggs rather than the bread itself? (not quite sure about the oil source) i also loved the beans that added further texture and bite, and the fried eggs that had wonderfully crispy edges and perfectly runny yolks. they were the perfect accompaniment to the bread!

the other popular choice at the table was the baked eggs:

baked eggs, tomato pepper ragout, greek yoghurt, toast, with chorizo sausage – £9.50
i only had a few bites of this so can’t say much about it, but it was enough for me to appreciate the ultra tastiness of the tomato ragout – it was hearty, tangy (but not acidic) and extremely flavourful. the yoghurt and runny yolks topping the ragout perfected the mix of flavours. the chorizo was also one of the yummier ones i’ve had included in a brunch dish – iit was moist and tender, a far cry from the tough and dry chorizo one is sometimes unfortunate enough to encounter in life.

last but certainly not least, we got a serving of coconut bread to share:

coconut bread, lemon curd cream cheese, poached rhubarb – £7.50
given the serving size, i thought this dish was on the pricey side. no regrets getting it though, because it was a refreshing accompaniment to our savoury mains. my favourite part of this dish was definitely the lemon curd – smooth, thick, creamy and a perfect balance between sweet and sour. i loved it and found myself using every but of rhubarb and coconut bread left to soak it all up! the coconut bread on its own left less of an impression; there was only a very faint hint of coconut and if not for the odd bit of coconut that i chanced upon in the process of enjoying this dish, i would have completely forgotten that it was meant to be coconut bread. maybe if i had had it without the lemon curd, the coconut flavour would have shone through more. texture-wise the bread was dense and moist like banana bread which i really enjoyed. the rhubarb added a good juicy crunch to round the dish up.

all in all, we were really satisfied with the food and ambience of the place but the one thing which we all found lacking was the service. it wasn’t particularly personal or warm; in fact, it was rather abrupt and cold at times. perhaps it has to do with the restaurant’s location and it catering to lots of hip and cool arty farty types? that said, it doesn’t detract too much from the fact that good food is served in a nice ambience, so it is definitely worth checking out if you have some spare time before or after catching a train. i didn’t try any, but i heard the coffee is good too! and did i mention that they take reservations?