tang yuan in peanut soup is one of my all-time favourite desserts (i cannot emphasise “all-time” more!!!).  while in london, the freezer almost always has some frozen tang yuans (definitely go for springhome brand; they’re the best by far) to satisfy those random late-night tang yuan cravings my (crazy) housemates and i have; that’s what you get in a house of 5 (greedy) asian girls 😉 . sometimes we have it with canned peanut soup, other times we just have it in ginger soup – perfect for a cold winter’s night.

its hard to find good ah balling in singapore these days; its the kind of thing i avoid ordering at dessert stalls which serve a whole range of desserts, because i’m always convinced those stalls just use frozen tang yuans anyway, so why should i pay a premium just to have them at a hawker centre and not at home? am thankful that stalls like this remain, stalls that still make their ah balling from scratch (you can see an aunty hard at work in the stall)!

75 ah balling is located on the 2nd floor of the golden mile hawker centre and its hard to miss given that there’s almost always a line of people in front of the stall (with good reason, i think!). 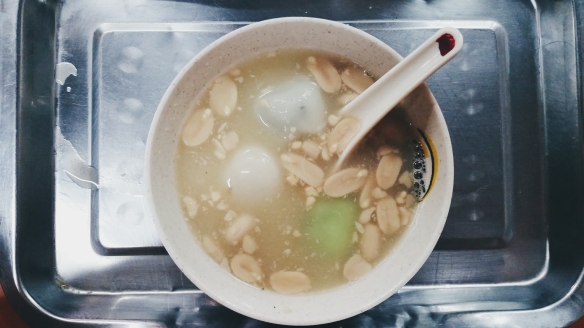 the peanut soup is definitely the star of this dessert. the soup is fragrant and sweet (but not overly or artificially so) while the softness of the peanuts is a sign of how long they’ve been boiled for. they also serve the tang yuans in ginger soup at this stall, but i’d say definitely go for the peanut soup because it really is one of the better and yummier ones around.

as for the homemade tang yuans, they come in 5 different flavours – black sesame, peanut, red bean, yam and green tea! i like my tang yuan filling to have a little crunch/graininess so i normally head straight for the peanut or black sesame instead of the pasty red bean and yam types. couldn’t pass on the green tea though, so i ended up going for 4 tang yuans, a mixture of green tea, peanut and sesame: 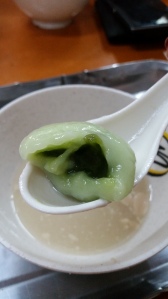 i felt that the skin of the tang yuans was a bit thick, as you can probably see from the pictures. but the saving grace was its texture; despite being thick, the skin was very smooth and soft and i think that made all the difference between the tang yuans here and the store-bought ones. the green tea one was decent but i probably wouldn’t order it again when i return. it was good that the matcha flavour wasn’t too artificial, but i did think its skin was exceptionally thick, at least thicker than the rest. favourite was the peanut – i love it when the peanut filling has white sesame seeds mixed in; so yummy!!! plus check out its explosive goodness… bite into it with caution, you have been warned heh.

already craving another bowl of this just looking at these pics; if only good ah balling in peanut soup was more readily available! i also like the one at maxwell hawker centre, but that stall always runs out by lunchtime and i do prefer the peanut soup at this golden mile stall. they charge $1.70 for 4 tang yuans in peanut soup/$2 for 5, while plain peanut soup goes for $1.20. it doesn’t get much cheaper (and better) than this, folks!

to me, this is serious comfort food. simple is always good 🙂