was suddenly hit by a massive craving for some good indian food and had intended to give the legendary tayyabs a try, but we were put off by the idea of a potentially (and highly possibly) snaking queue on a chilly autumn friday night. so based on my cousin’s recommendation, to khan’s we headed instead! am happy to say that we had no regrets at all, because i was super pleased with the yummy meal. in fact, so pleased was i that i think a trip to tayyabs may no longer be necessary…

one often associates bayswater with a slew of chinese restaurants – mandarin kitchen, goldmine and the like, so when i told friends that i was heading to bayswater for indian food, i was unsurprisingly met with some raised eyebrows accompanied by “indian? not roast duck?”. i think this will be happening quite a bit more in the coming year (final year omg #timeflies!!!) though, so hopefully the surprise will soon turn to curiosity and excitement to try it too 😛

i was imagining a family-run-type establishment – small, cosy and not occupying more than 2 shop spaces, but i was wrong. very wrong. khan’s has been around for 34 years now, and their success and popularity shows in the large space they occupy and high seating capacity the restaurant has. 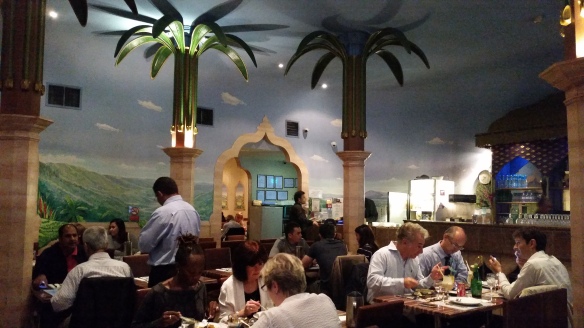 yes, the decor is slightly (understatement?) tacky, but the place is spacious, clean, big and comfortable. beyond this first section where you can experience the pleasure of dining under palm trees while indoors, the back section offers you an alternative of moroccan lights as company. at times i felt like i was in one of those arabian nights restaurants in a theme park, but i wasn’t in the least bit bothered by it because the dining area is actually rather pleasant.

they have a good range of dishes to choose from on their menu, still traditionally prepared by the founder’s family, and purported to have maintained the same quality and standard over the decades.

for the 2 of us to share, we ordered a serving of butter chicken (what i had been craving and needed to have), fish tikka curry, sag paneer and a garlic naan each. food was served rather promptly and by that time we were starving and all ready to tuck in. 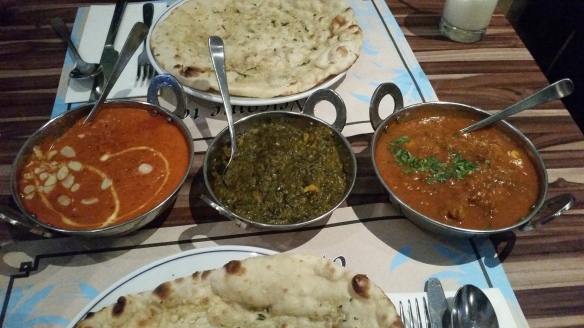 starting with the butter chicken – chicken prepared in butter, cream, cashew nuts, coconut, masala sauce and dressed with almonds-, this was a butter chicken lover’s (ie me) dream come true. the gravy was ultra creamy and flavourful, thick and rich but not too heavy and with a subtle but palpable taste of a nuts – it really hit the mark for me and is definitely one of the better (if not the best) butter chickens i’ve had in london. i couldn’t stop dousing my naan in this sinful goodness! our conclusion: definitely worth the calories 😛 our only qualm about this dish was the chicken itself – it was a tad dry and we hoped that the meat itself would be more seasoned. it lacked the tastiness that the gravy had, possibly because the chicken wasn’t cooked in the gravy long enough (no idea, just hazarding a guess).

as for the sag paneer, (spinach cooked with homemade cheese), it was nic’s absolute favourite of the night. i really really enjoyed it too, though if i had to pick one fave of the night, i remain loyal to my beloved butter chicken. the spinach was very tasty and creamed to the perfect point that it was smooth but not overly so and still had a nice texture to it. it was also of the perfect consistency and thickness and though i can’t pinpoint what it was about it that made it different from sag paneer that i’ve had at other indian restaurants, it was very yummy and certainly worth an order if you’re at khan’s.

last but not least, we had the fish tikka curry – slices of oven baked fish cooked in a medium spicy sauce. this dish was marked with a little heart next to it on the menu which represents “healthy eating: low fat”, so i suppose this was our (admittedly rather feeble) effort to make the meal a slightly less sinful one… we also enjoyed this dish! it was lighter than the other 2, where the sauce was less creamy (but that didn’t make it any less tasty) and a lot more tomato-ey. my favourite part of this dish was the fish pieces in the curry. they were fresh and naturally sweet, which was a pleasant surprise because one normally associates fish in such things as tasting frozen and not very fresh. 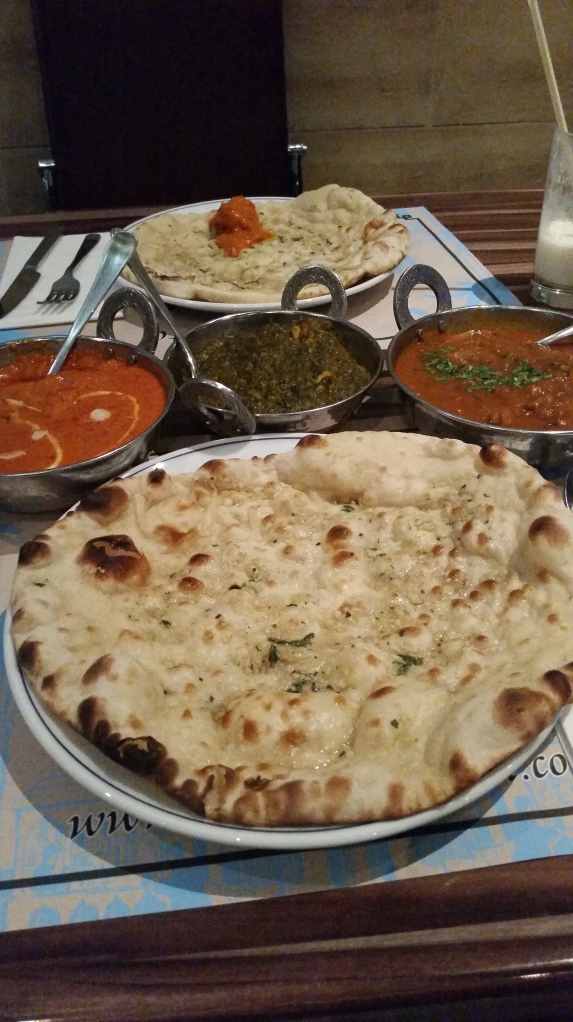 garlic naan – £2.65
not forgetting my staple at any indian meal, naan!!! (do you sense my excitement; just writing about it makes me excited hahaha) had a garlic naan here and was extremely satisfied. the naan was just the way i liked it – (1) BIG, (2) crispy edges, and (3) fluffy. it had the surface area of an entire plate, and was wonderfully soft and pillowy while having the odd slightly-charred crispy patch and crispy edges all around. used every bit of it to soak up all the flavourful and creamy curries, and all the plates on the table were wiped clean by the end of the meal. (we were also ready to enter into food comas by that point.)

all in all, it was a hugely satisfying meal at khan’s and i was extremely happy. i can never leave bayswater without having some gelato at oddono’s in whiteleys, so to top off an already good night, we headed for my fave gelateria (in close competition with gelupo for top spot in my books) for our usual hazelnut-pisatchio-gelato-in-a-cone-please fix. my idea of a great friday night, and something i’m definitely going to need to do again soon… 😀

PS. saw a sign outside the restaurant advertising their lunch buffet at a really reasonable price of £9.95 – that’s certainly something worth checking out too!