Reasons Singapore is the most delicious place on earth

this is why i am always over the moon to be home 🙂 nothing beats the amazing food on this sunny little island!!! :’)

back in singapore for christmas; stay tuned for some singapore eats!

had the chance to explore more food options in the bloomsbury area when the family visited and stayed in cartwright gardens just before i came home for summer! what a pity i never got down to trying these outlets earlier; i would probably have visited them quite a bit. good thing i’m not moving very far (at all) next year and so i’m going to have plenty of chances to frequent these places and make up for lost time hahaha!

1st place on the newly-discovered list: Chilli Cool!
should really have tried this place earlier. i think its the perfect place for students to get a legitimate asian food fix – reasonably-priced authentic sze chuan food in generous portions that are perfect for sharing! my friends and i had heard of and toyed with the idea of checking this place out and the hotpot buffet they have there at some point during the year, but just never got round to going… i think the lure of the juicy roast duck (and hazelnut + pistachio gelato at oddono’s after) at goldmine normally triumphed.

but because my dad is the ultimate china man (he needs his chinese food everywhere he goes – steamed white rice, piping hot soup etc), chilli cool (2 minute walk from our hotel) was the obvious choice for dinner on the first night we were back in london after cruising for 2 weeks with a lack of proper chinese food. (according to my mum, my dad’s cheeks had were getting more and more sunken by the day lol)

chilli cool occupies 2 spacious units along leigh street and is simply decorated but quite homely. we visited on a friday night and it was nearly full, patronised by a good mix of both asians (more often than not, a sign of the real deal when it comes to asian food heehee) and caucasians. besides the a la carte menu, they also have a hotpot buffet option – perfect for a cold winters day! we weren’t up for stuffing ourselves (post-cruise detox time!!!) so we ordered a few dishes from the a la carte menu to have with rice.

(sorry the pictures i have aren’t great at all; the lighting wasn’t very optimal and everyone was starving and wanted to tuck right in!)

here’s the chicken fried with chilli and cumin which was recommended by the waitress:

not sure if you can see from the picture, but the servings are pretty big compared to what you’d get at a typical chinatown restaurant, and really good for sharing in a group. this chicken was probably my favourite dish of the night. it was fried to perfection and extremely flavourful! crispy on the outside in this yummy batter and juicy and tender on the inside. the chilli and cumin were also added in just the right amount, giving the dish a really satisfying kick! definitely going to order this again when i return… SO yummy that it made me forget every bit of deep-fried unhealthiness that was being consumed wahahaha. unfortunately, the picture really does not do the dish any justice 😦

the beans were fresh and not overcooked such that they retained a nice bite. it was again a generous serving, but i wouldn’t recommend it to the faint-hearted (when it comes to spicy food), especially if you aren’t armed with tissue paper for dripping post-chilli noses. it was spicy even for us and we were really impressed by the caucasians at the next table who were happily devouring all of it… immunity achieved from repeat visits, maybe? 😉 the dish was really tasty and was delicious when eaten with rice.

the bowl was seriously gigantic. to give some scale, the diameter of the bowl was nearly the width of the table!!! but our initial worries of not being able to finish it turned out to be unfounded since it was so delicious that there was nearly nothing left by the end of the meal. the soup is typically sze chuan and was served piping hot, full of green and red chillies, preserved vegetable, potato and plenty of fish slices. the fish was extremely fresh (definitely not the frozen kind), and what i really liked about it was that they were very generous with the ingredients, as you can probably see from the picture. this soup is perfect for sharing in a big group (it was way more than enough for the 4 of us) and i can imagine it tasting even more delicious on a blustery winters day… my only qualm about it was the shocking amount of oil that formed a thick layer at the top of the soup when it was first brought to our table, like an oil spill at sea. i was initially quite put off by it but we managed to scoop out most of it before tucking in, and once i did, it was so good that all oily thoughts were banished and everything was fine and dandy.

this was probably the most forgettable dish out of everything we ordered – tofu with black fungus and edamame:

in terms of flavour it was definitely outshone by the other dishes, but i suppose that’s what made it different from the rest, and not necessarily in a bad way! it was good palette cleanser since it was light and the least oily of all. definitely the healthiest too! the serving for this dish was exceptionally small though, and i probably won’t be ordering this the next time i go.

chilli cool was a great experience overall. service was prompt and friendly, and my family enjoyed the food (my dad certainly left a happier man with fuller cheeks :P) though we all agreed it definitely wasn’t the healthiest kind of food around given that most of it is fried and oily. nevertheless, am quite certain that i will be back, brandishing tissue and an empty stomach to try the hotpot buffet, maybe! if not, the a la carte menu has an extensive range of dishes so i have many more to try!

another joint along leigh street, which caught my attention on the way to chilli cool because of the impressive number of stickers and accolades they had stuck in the shop window: 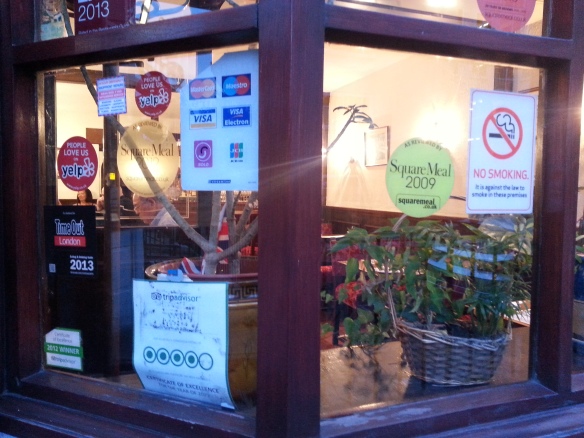 there are 2 shops to the restaurant: one of them is for takeaways while the one is a proper sit-down restaurant that appears to be a nice  little cosy and chill place for a good seafood meal. the mother and i were craving some good fish and chips one night after a long day of shopping and decided it would be perfect to buy some fish and chips back to our hotel to feast on 😉

they have a range of fish available (check out the menu below), but we went with the cod as recommended by the very friendly guy behind the counter in the shop! we also wanted to try the salt and pepper squid but were sorely disappointed when we were told that they didn’t have them that day 😦 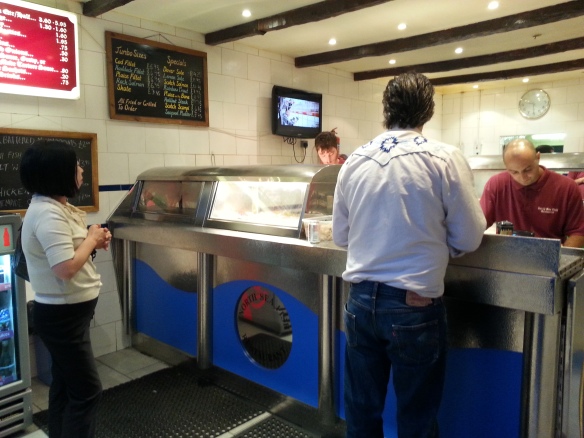 the service is efficient (which should be the case in takeaway outlets) and there were a few pieces of fish being kept warm in an oven-like thing, ready to go whenever a customer came in with an order. we ordered a jumbo-sized portion though, and so had to wait for about 10 minutes for it to be fried. there was a steady stream of customers coming in and leaving happily with their takeaway bags while we waited, adding to the anticipation that was building from the moment the gregarious guy behind the counter told us was the “only fish and chips you’ll eat in london from now on”! i later found out that the fish and chips here has been touted as a contender for the best fish and chips in london!

got back to the room and was greeted by this piece of fish gloriously glistening away under the light: 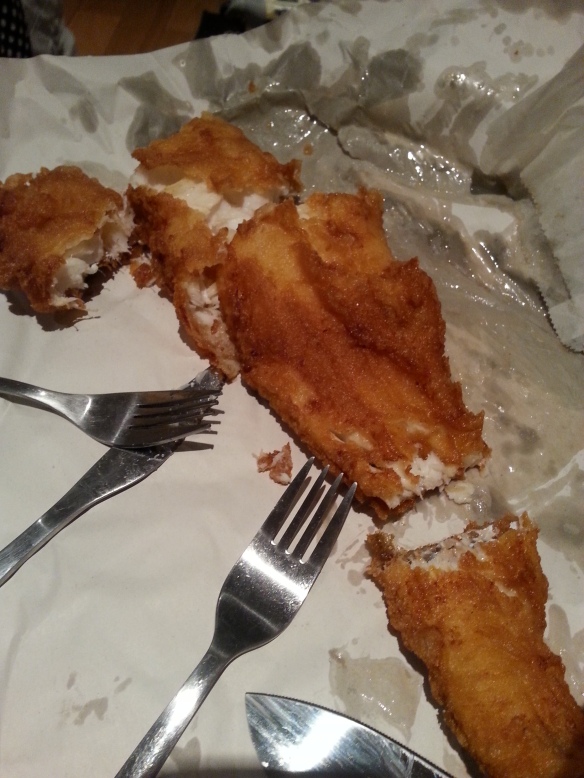 ‘
we felt that it was definitely worth paying a little more to get the jumbo-sized portion because it was really a rather big piece of fish! but of course if you’re having it alone then a regular-sized portion would probably suffice. the fish was EXTREMELY fresh – we were told that the restaurant only uses fresh fish and never any frozen fish at all, which i really like about them because usually for fish and chips and other fried fish dishes in general, its often the case that frozen fish is used instead of fresh catch and not much attention is paid to the quality of the fish used.

the batter was light, crispy and not too thick. it was clear that the oil used was fresh, and i know i’m repeating myself here but the fish was really of great quality. a drool-worthy close up of the fish:

as for the chips, they were alright, but nothing to shout about. i felt that they could have done with a bit more salt & vinegar, but that can be easily requested for when placing your order. i would also have preferred them to be a little crispier on the outside. its possible that they became slightly soggy from the condensation that resulted from being wrapped up in paper while hot, but the walk home was only three minutes and so i think they probably weren’t very crispy to begin with. do note that they charge separately for the fish and the chips. 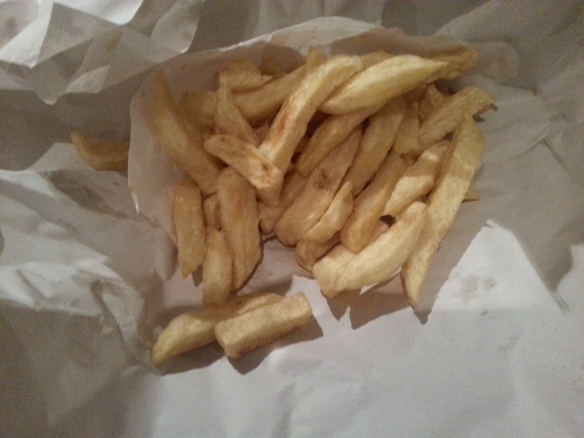 think i might go with a different accompaniment to my fish the next time i patronise north sea… am eyeing the beer battered mushrooms and the salt and pepper squid! might also give the sit-down restaurant a try – they serve a range of seafood in a range of cooking styles (grilled, fried etc) along with homemade desserts.

best fish and chips in london? i would say its definitely one of the better renditions of this national dish, but wouldn’t be so quick to say its the best, especially since i felt that the chips could have been done better! i have also had some really good fish and chips at Bonnie Gull (21A Foley St, London W1W 6DS). both are worth a try! 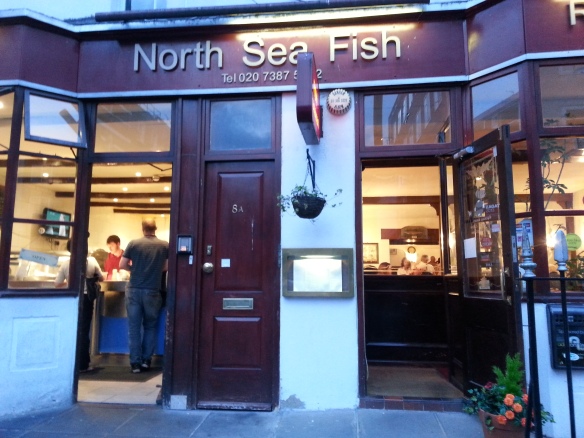 grabbed a quick bite from this little cafe serving moroccan/lebanese-type food, and immediately wished i had discovered it earlier on in the year!!! had the falafel wrap which was SUPER delicious, filled with the yummiest falafel ever and lots of fresh salad and scrumptious homemade sauce. i had it in a normal wrap, though there’s the option of paying a little more and having the wrap in homemade spinach/tomato (if i’m not wrong) moroccan bread. there’s also the option of adding halloumi cheese, which i am sure is delicious! its a big wrap which they cut into 2, and it’s overflowing with goodness heehee. i LOVE falafel, and this is probably one of the best i’ve had. it was perfectly spiced and just the right amount of crumbliness while not being too dry at all – a must try for all falafel fans out there!!!

i definitely want to go back to try their range of meat skewers and salads and houmous. was eyeing the super hearty and wholesome plates of food that some at the cafe were having while i was getting my wrap to go. just look at that hunger-inducing display that’s filled with all things amazing:

everything is really reasonably priced too! they have coffees for under £2, and the lebanese falafel wrap was just £3.50 if I’m not wrong…
king of falafel is definitely going to be one of my first stops once i’m back in london after summer!!!