am back in the +65 for summer (best time of the year!!!) and finally got the chance to try the much raved about kin kin chilli pan mee. admittedly, i am pretty late to jump on the bandwagon but hey, better late than never!

if you’re reading this and wondering “what on earth is pan mee/ kin kin chilli pan mee?!” (pretty much my reaction when i first heard about this), pan mee is basically u mian, and at kin kin which hails from our neighbour malaysia, they serve it dry with some seasoned minced meat, ikan bilis, fried garlic, an egg with a glorious runny yolk, and you are free (and highly recommended) to add plenty of their famous dry chilli flakes. perhaps better explained by this sign pasted on their shop door:

visited on a sunday morning for brunch. they open at 11am and when we got there at about 1115am, we did not have to queue but we snagged the last 2 available seats in the (very decently-sized) shop to make a full house.

turnaround time for the tables is pretty quick; people don’t tend to linger at such places long once they’ve finished their meal (although this shop does have air-con – a mega plus point-  so one can sit pretty comfortably for an extended period of time) and the ordering system is simple and efficient – you are given a sheet of paper to indicate your orders and you take that sheet of paper to the counter to pay. your food will then be brought to your table when ready.

the menu consists of just 6 items:

most people order a bowl of noodle accompanied by a bowl of soup, and we followed suit. we waited about 15-20 minutes for the food, which i was quite surprised by because i expected an establishment like that to be churning out bowls by the minute. nevertheless, i suppose you could say it was worth the wait, though i wouldn’t go so far to say it is worth queuing 2 hours for (which i heard was the case when they first opened).

signature dry chilli pan mee – $5.00
might not look like very much in the picture, but its actually a pretty decently-sized bowl that left us feeling quite satisfied! anymore and it might have become jelat i feel? they were pretty generous with the ingredients too; there was more than enough meat/meatballs to be eaten with the noodles.
after mixing:

what i found interesting about this bowl of pan mee was the fact that it did not taste dry or rubbery (which noodles that lack sauce sometimes tend to be) at all despite the lack of sauce. after mixing, the noodles were mostly coated in the delicious egg yolk, chilli flakes, and some (very minimal) sauce from the minced meat. each individual component was not outstanding (although 100 gold stars go to the perfectly poached egg – runny egg yolks never fail to steal my heart), but the mixture of everything put together was actually very tasty and did not disappoint! special shout-out also to their famous chilli flakes which really packed a punch:

we also ordered a bowl of soup to share between us: 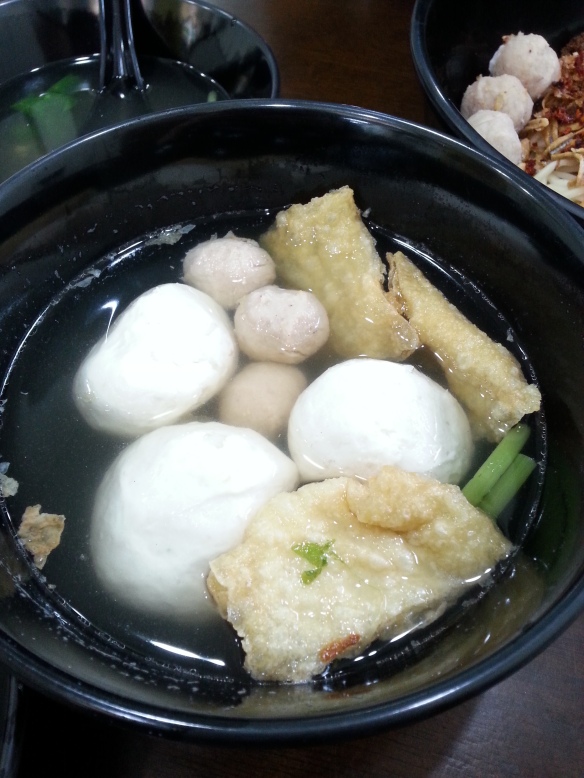 fishball/bean sheets/meatball soup – $4.00
the meatballs and bean sheets were nothing to shout about; they tasted like regular kinds that you can get commercially in supermarkets. the fishballs on the other hand, were something else! they were firstly, huge (check out those bulbous globules in the picture) and secondly, really really soft and pillowy!

definitely some of the softest and largest fishballs i have ever had. there was still a nice slight crunch to them on first bite, but their insides were extremely soft and fluffy. besides the pan mee, i would say the fishballs are worth a try if you are a fishball fan! i’m actually not one at all but i still quite enjoyed them. i think they must be rather popular because they allow customers to buy them raw!

we polished off everything, generally a sign of a satisfying meal:

and now for the all-important question: would i return? i think its something quite unique and different and i’d return if i’m specifically craving it! i would probably occasionally think of having a bowl and would be quite happy to make the trip down as long as the queue isn’t more then say, 10-15 minutes long.

note that if you’re looking for traditional ban mian though, this is not the place for you to have that craving satisfied (you’ve probably already gathered that from the pictures). its also worth noting that we felt really really thirsty for the rest of the afternoon so i think the food must have contained quite a bit of msg… 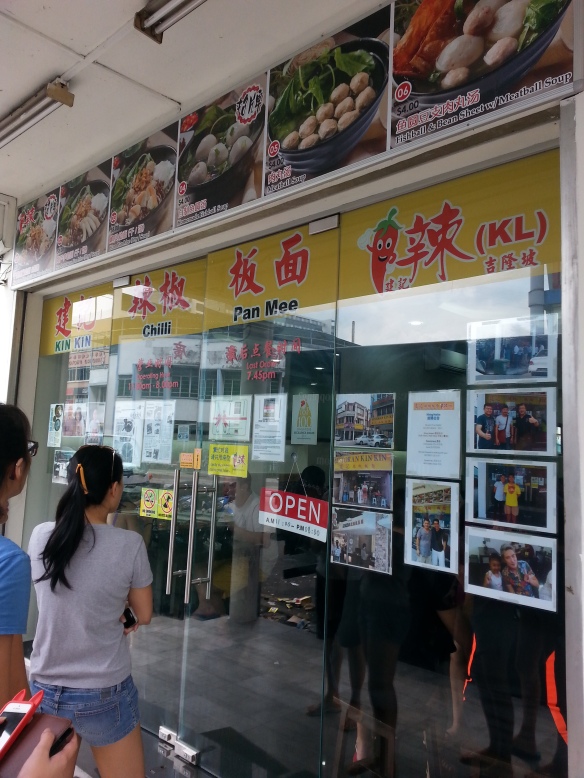 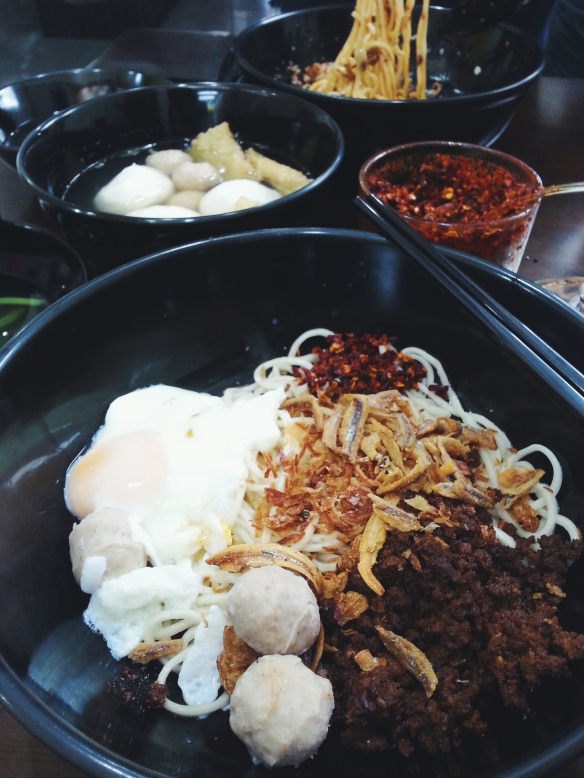