and the search for the best prata in singapore continues! my all-time favourite prata stall is found in a relatively nondescript coffeeshop in sin ming (see here), but to my greatest horror, it was closed on the day i headed there for a prata fix 😦 was super disappointed because i had been craving it and had planned to head down on that day quite a bit in advance! and was even more shattered when the kaya toast stall aunty informed me that she didn’t have french baguettes for the kaya toast that day (i love it). there was a serious lack of spring in my step as i left the coffee shop…

refusing to settle for prata house along the main upper thomson stretch itself (i used to go there as a jc student; the prata is oily, and so are their floors), we decided to give casuarina curry a go since i hadn’t been in quite a while, and was interested to see how it oompared to my more recent prata adventures. googling the address however, the reviews didn’t seem as stellar as they used to be; it was suggested that a prata place in springleaf now served prata that was much better, and so that’s where we decided to head to!

tucked at the very end of a row of shops (many of which were food outlets) facing the main road with a sleepy residential estate behind is prata place. its not a very big shop, but spacious enough to serve a decently-sized crowd. it is extremely casual (perfect shorts & slippers kind of place)  and just very functionally decorated (though i don’t think anything more is usually/should be expected more of a prata shop) but a huge plus point is that there’s air-con so this is the perfect place to take visitors (or anyone for that matter) who dislike sweating it out in hawker centres to get good prata. service is also extremely friendly and efficient (orders are taken on ipads!) 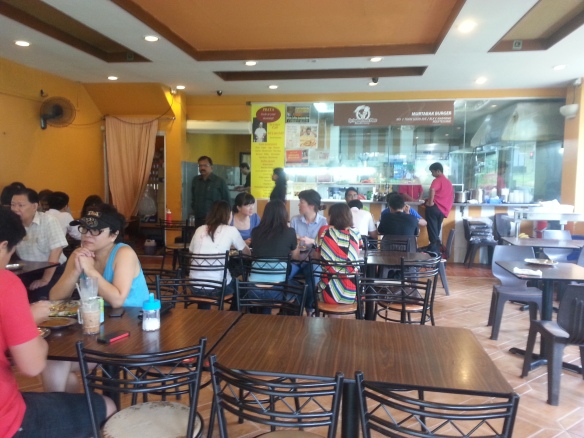 they have a huge range of pratas/thosais/murtabaks including some interesting choices like a chicken floss prata, red bean prata and a prata burger! here’s the very exciting menu: 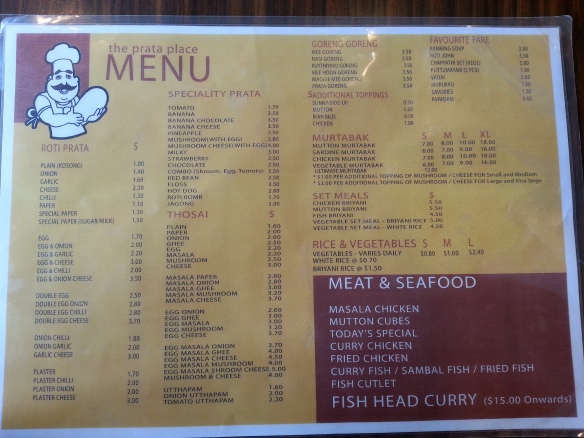 check out the fascinating inverted V-shaped paper prata that the neighbouring table ordered:

we ended up ordering a plaster prata and a fish briyani set (because by the time we reached prata place, we were famished and needed some rice) for the 2 of us. and of course a milo dino couldn’t be left out of the picture 😉 (who even eats prata without a milo dino/teh tarik as accompaniment anyway?!)

we weren’t wowed by this at all; it wasn’t anything to shout about though it was definitely very authentic. quite a big piece of fish was given (though you can’t really see its size in the picture), as well as a very generous serving of briyani rice accompanied by pappadam and achar. the briyani sets seemed to be quite a popular option with the lunch crowd though, so maybe the chicken/mutton briyani is more exceptional! 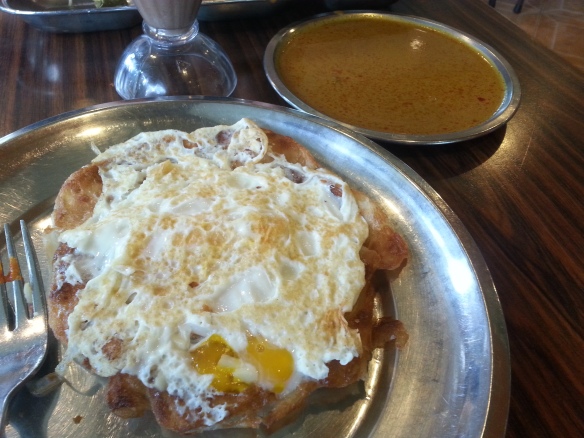 the only thing better than a cheese prata is an egg (with a wet egg yolk, no less) plastered across its top. this was amazing – i was in prata heaven. the prata was crispy on the outside but soft and fluffy inside. i absolutely loved the addition of the egg on top of the prata rather than within in like in regular egg pratas (my first time having a plaster prata!!!), and loved how the cheese they used here wasn’t a slice of sandwich cheese inside the prata, but was instead mozzarella bits sandwiched between the prata and the egg. i was really extremely satisfied and decided that plaster prata was probably one of my new favourite things to have (going through a plaster prata phase now – had one the very next day at tekka market, but was sorely disappointed because it paled in comparison to prata place’s). the curry was also good – not too sweet not too spicy, and was not the diluted/tasteless type.

i was intially intending on ordering an additional plain prata to really put their pratas to the test, but after having my plaster prata, i decided that that wouldn’t really be necessary 😉 the crispy outside and the fluffy inside really shone through, and i doubt their regular pratas will be anything less than that. definitely want to try their red bean prata the next time i visit though! (i saw pictures, it looks like a tau sar pia!)

the only thing holding me back from returning more often is the distance; it’s about double the distance to get here compared to getting to sin ming from home. but given that it opens all day (nearly – till midnight!) every day, who knows how long more i’ll be able to stay away from that plaster cheese prata…? 😉 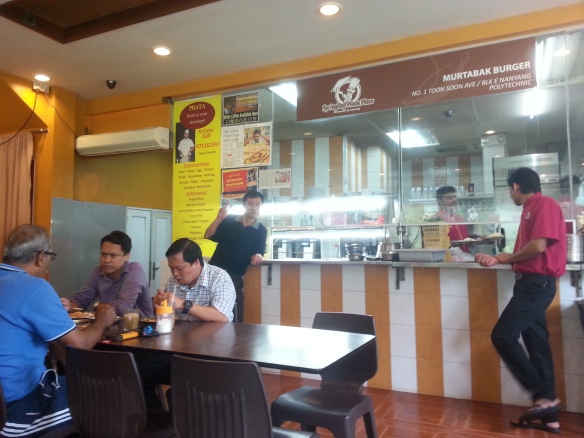